Head of the Lab —
Vladimir Saenko

Below is a list of the projects in which we have been participating as commissioned by various Russian Space Research agencies.

Commissioned by the Federal Scientific Research Centre for Measuring Systems

Developing an experimental centre for conducting the scientific and technological RD.. Creating a testing centre for research and experimentation with electronic systems to secure resistance to powerful ultra-short electromagnetic pulses (“Impulse-07”). Develop computational and experimental research and testing methods to evaluate the resistance of the electronic components to powerful ultra-short pulses of electromagnetic interference.

2. To develop the component of the test construction work on “calculating crosstalk from charges of static electricity and transmission analysis programmes when changing the place of the charge on space satellite “Express MD1” or tracking the harness”

3. The component of the test construction work on “calculating crosstalk from charges of static electricity and transmission analysis programmes when changing the place of the charge on space satellite “Kaz-Sat-2” or tracking the harness”

We worked on developing analytic experiments to supply computer software for modelling the effects of electrostatic discharges on the onboard cable network of the space-born radio telescope “Spektr-R”.

Compilation and analysis of the experimental and theoretical data on the electrical discharge (ED) degradation of insulating materials and coatings used or intended for use in space technology, a comparative assessment of the role of  other degradation  factors and methodical approaches to study the electro-physical, physical and chemical characteristics and possible degradation mechanisms. Ways and means to reduce the degradation of the conventional and radioactive materials and coatings for space application ( Research project name "Elektrokosm-MEIIT" part of R & D "Magistral")

1.     Participation in the design and development work on the topic: Defining immunity onboard avionics with cable network block DM KVTK from static electricity to release EP (drive) materials.

2.     Qualification of the onboard equipment for the "Express MD-1" satellite immune to electromagnetic interference caused by ESR (electron spin resonance). Fabrication of the testing equipment (part of the development work)

To analyze experimental data on the radiation induced conductivity of conventional and advanced polymers intended for the "Elektrokosm-MEIIT." spacesraft 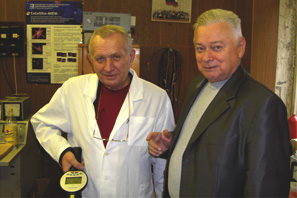 Testing CCC B SAZ for resistance to electrostatic discharges (ESD)

Testing samples of materials used on the outer surface of (block DM) RB KVTK to study their response to charging events in simulated space conditions.